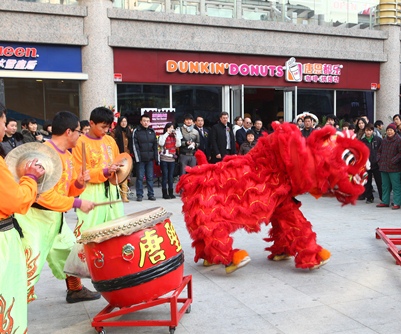 In Xi’An city, the restaurant is locatied on Lou Ma Shi Pedestrian Street, at Xing Zheng Yuan Square. In addition to being the 10,000th in the world, this restaurant is the 10th in Xi’An and one of the more than 80 locations in Greater China since our first opening in 2007. To celebrate the momentous occasion, the restaurant hosted a grand opening ceremony on December 16 complete with local dignitaries, a traditional Chinese lion dance and a jazz band. In addition, the 10 stores in Xi’An gave away 10,000 munchkins on December 16!

The announcement of our 10,000th Dunkin’ Donuts restaurant in Xi’An, China marks a significant milestone in our commitment to global growth. Dunkin’ Donuts’ has grown from a single restaurant in Quincy, Mass. to a global brand located in 32 countries around the world, including Chile, China, Colombia, Germany, Indonesia, Russia, Spain, Thailand, Saudi Arabia, and more.

An important factor in Dunkin’ Donuts’ global success is our ability to offer our guests high quality food and beverages served in a friendly, fast environment at a great value. Whether you’re in New York City, Moscow, or Xi’An, you can enjoy the same great cup of coffee, made just the way you like it. 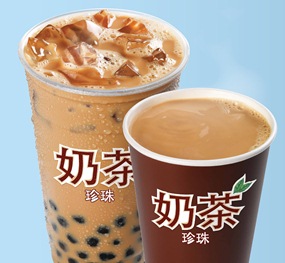 If you’re ever in Xi’An, two interesting products to try include Rose Flavored Iced Milk Tea with Boba and the “Over the Top” Bagels. Rose Flavored Iced Milk Tea with Boba is a loose leaf brewed, Rose flavored Milk Tea served over ice and Boba (commonly called "bubble" tea with Tapioca balls on the bottom of the beverage). We also have delicious "Over the Top" Bagels, which are served warm and come in several savory varieties, including Pineapple , Ham, Tomato & Cheese; Spinach, Roasted Red Peppers, Roasted Garlic Mayo and Cheese; and Caramelized Onion, Cracked Black Pepper and Cilantro. 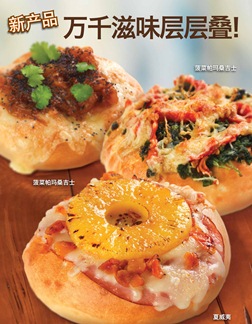 Dunkin' Donuts' "Over the Top" Bagels in China

So, where will you be able to find Dunkin’ Donuts next? Dunkin’ Donuts recently announced plans to enter India and will work with Jubilant FoodWorks Ltd. to develop, sub-franchise, and operate more than 500 Dunkin’ Donuts restaurants throughout India over the next 15 years.  Domestically, Dunkin’ Donuts opened new restaurants during the month of December across Arizona, Florida, Georgia, Mississippi, Pennsylvania, and Washington DC.

As 2011 comes to a close, we are delighted to celebrate the opening of our 10,000th Dunkin’ Donuts restaurant, and look forward to many more openings to come both in existing and new markets around the world.