#WTFast - Behind the Scenes with Ellen Brennan

When Dunkin’ Donuts first asked me if I could grab a take-out bag in-flight, I was eager to do it but I knew it would be challenging. I decided to tackle it one step at a time. The two biggest obstacles I saw were hitting a small target - which I had never done before - and flying away with it.  Which no one had ever done before! Despite these challenges, I felt confident that if I trained accordingly I would be able to do it.

In order to train to hit a target, I had to create a safe training and target environment. Using orange tape, I created a mock “Dunkin’ bag” and attached it to a tent pole with seven meters of masking tape (roughly 22 feet). That way, when I hit the target, the tape would easily break and nothing would attach to my wingsuit. Next, I needed to accomplish hitting the tape consistently with my hand.
It’s amazing how sensory overload affects you when you’re flying. The target was so small and I couldn’t see it until I was just a few seconds away. I had to train my brain to visualize the bag so I would know what to expect before seeing it. After slowly moving towards the target over many attempts, I was finally able to hit it consistently by the third day. 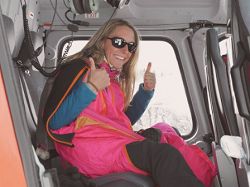 My next task was to see if I could safely fly with a bag attached to my arm in case I was able to grab it mid-flight. This was a huge unknown, since no one had ever done it before. I decided that the safest way to do this would be in a skydiving environment. I brought in professional wingsuit coach Scotty Bob Morgan and by the end of the week I felt completely confident that I could fly with a bag attached to my wing.

The only thing cooler than flying down a mountain is watching someone else fly in front of you. It is the most beautiful site and beyond incredible to watch, so I decided that I would have Laurent Frat jump in front of me. I would follow him, enjoy the view, and only consider the target once he pulled off into the safe zone.  This allowed me to relax and arrive at the Dunkin’ pick-up area with tons of altitude to spare.

I’ve learned through this project that settling is not an option. If there is something keeping you from achieving a goal, you have to figure out a way around it. Break it down, simplify it and never give up! This was for sure my most technical project to date, but I enjoyed every moment of it and can’t wait for the next challenge.