We are thrilled to be partnering with “America’s Got Talent” (AGT) for its fourteenth season. If you are a fan of the show, it is no secret that AGT runs on Dunkin’. This season, we saw many exciting changes with a new host and two new judges joining familiar faces Simon Cowell and Howie Mandel. One thing that remained constant were the Dunkin’ cups once again featured on the judges’ table, contestants dancing in the Dunkin’ Lounge each week, and dramatic closings with America recently saving wildcard Ansley Burns in the Dunkin’ Save vote.

Recently, we launched our Dunkin’ “Design a Cup” Challenge for the show, where we asked participants across the country to submit their original tumbler designs for the chance to win a trip to Los Angeles to attend an episode of AGT, free coffee for a year and get their design featured as the Dunkin’ tumbler on the judges’ desk for an episode. Last week, we were excited to unveil the winner of our challenge. 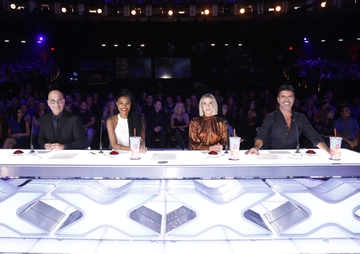 After 22,000 entries and tons of votes, our winner Mollie Hanselman from Kansas City, Missouri was chosen as the winner!

Following her big win, we sat down with Mollie for a Q&A and to get the story behind her winning design:

Tell us a little about yourself!

I am a recent Graphic Design graduate from the University of Kansas.

Do you run on Dunkin’?

Absolutely! I love going to Dunkin’ during the PM Happy Hour break for a large iced coffee to get me through long afternoon study sessions.

What are you drinkin’ from Dunkin’?

Signature Lattes! No matter what the seasonal flavor, I am a big fan.

How did you hear about the contest?

My roommate’s mom actually mentioned it to me as a fun thing to do knowing we run on Dunkin’. One night I could not sleep and designed the cup for fun. Never in a million years did I think I would win!

Is this the first time you designed a cup?

What was the inspiration behind the design?

In this design I really wanted to merge the two iconic brands together in a fun way. To do so I used the checker structure and pulled in key icons from both. For example, you will see someone dancing, coffee, donuts, the judges’ buzzer and more.

Where were you and what were you doing when you found out you were the winner?

What is your favorite part about AGT?

The energy! When I attended the live show, the overall vibe was so exciting! I got a tour and even checked out the Dunkin’ Lounge. While on the tour I ran into Howie and he featured me in his Facebook Live.

Who is your favorite contender this season?

I love Kodi Lee and the Detroit Youth Choir! There is so much talent this season, it is going to be fun to see who wins the million-dollar prize.

Finally, ten acts have risen to the top as singers, dance groups, and even a gifted violinist compete for the coveted title and million-dollar cash prize on AGT. Tune in during the live finale on Wednesday, Sept. 18 at 8/7c on NBC to see who is crowned the Season 14 AGT winner.