Behind the Scenes of #mydunkin with Dunkin’ Donuts Fan Meg A.

This week, Dunkin’ Donuts launched its new #mydunkin advertising campaign featuring real Dunkin’ fans and their social media content that shows their love for Dunkin’ Donuts coffee. After sorting through tens of thousands of posts on Facebook and Twitter, Dunkin’ Donuts selected the first fans to appear in new television commercials based directly on their original social content sharing their unique Dunkin’ stories. First up, meet Meg A., our talented fan enjoying a #mydunkin moment while singing a capella.

We talked to Meg to learn more about her Dunkin’ story and go behind the scenes on the day of filming.

1.) Tell us a little about yourself and your life as a college student.

I’m originally from Walpole, MA and I currently live in Plymouth, NH where I’m junior at Plymouth State University. I’m working on getting a double major in theater and communications. Some of my favorite classes are the ones I take in the theatre department. I love my Acting classes and Voice and Diction classes that I have taken in the past, and I am currently taking a Script Analysis class that is very interesting. I’m looking forward to taking a Directing course next semester and also diving into some classes about film making. After college, I would love to pursue acting professionally and work on television or movies.

2.) When did you start singing and acting?

When I first entered elementary school, I actually wanted to play sports, so I tried a few different ones, but then I decided to join the Drama Club because I was more interested in singing and acting. I started auditioning and staring in musicals throughout elementary school and my first show was playing the role of Maria in The Sound of Music.

3.) Singing a capella is part of your Dunkin’ story. Tell us about your a capella group.

In college, I auditioned for the all-female a capella group called Mixed Emotions. Joining Mixed Emotions has been such a wonderful experience during my college career. There are 16 people in the group and we sing contemporary songs, but also sing throwbacks too. I have formed a lot of friendships with the other girls in the group and it’s been great training. I am an Alto in the group and also the Business Director. As the Business Director of Mixed Emotions, I am in charge of scheduling rehearsals, concerts, and gigs. I promote the group and any upcoming events through our Twitter and Facebook page, along with creating and posting fliers around campus. I set up the audition process with my co-directors, and plan what songs we are going to learn for our concert at the end of the semester. I also make sure everyone and everything is in check all semester and make sure that group members come to rehearsal to have fun and use a capella as a stress relief from busy school schedules.

I love singing and didn’t want to stop during the summer when school is out, so I also auditioned for a summer a capella group in Cape Cod called Cape Harmony. I was accepted into the group last summer and was able to perform with them throughout the summer at different events on the Cape.

4.) How does Dunkin’ Donuts coffee help keep you running during rehearsals? 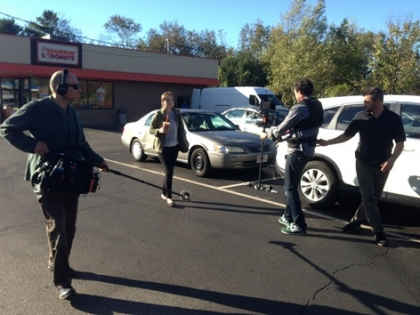 5.) What was it like hearing from Dunkin’ Donuts about the #mydunkin campaign?

When I was first contacted from the official Dunkin’ Donuts Twitter handle, @DunkinDonuts, I was excited they were reaching out and couldn’t wait to learn more about this opportunity. When I found out the details, I was so thrilled that Dunkin’ Donuts selected me to be in this advertisement. I was also very excited because I knew this was going to be a great opportunity for me, especially for the field that I’m studying in and my passion for acting and singing.

6.) Tell us about the day of filming for the #mydunkin commercial.

When the day came to film, I was a little nervous and hoped I was going to be good to work with. However, as soon as we started my nerves disappeared. Everyone who was on set was very nice and helpful. It was fun walking around my college campus with a camera crew and it was cool working with the stylist and make-up artist. This ended up being the best day of my college experience so far! 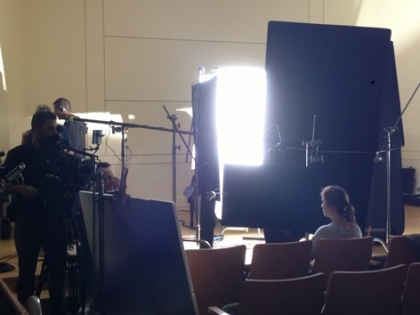 7.) What were some of the key takeaways you’ll remember about this experience?

I learned so much from this experience, but I think one key takeaway is that I was able to get an inside look on being both in front and behind the camera. Until this opportunity with Dunkin’ Donuts happened, I didn’t realize how many people it takes to film a commercial and the many different roles and responsibilities for people working behind the camera. The experience was very eye-opening for me and has definitely added to my interest with working in film.

8.) What were some of your favorite moments from filming?

Two of my fellow a capella group members, who are also my best friends, were also able to participate in the ad so it was nice to go through this experience with them and it’s something we’ll always remember. One of my other favorite moments was when we got to freestyle a capella for the commercial. We have a tight schedule during rehearsals and we don’t have a lot of time to freestyle so it was fun to be able to do that and experiment with different beats and harmonies.