This March, the two sister brands have teamed up to launch Affogato in Dunkin’ and Baskin-Robbins combination stores nationwide. Taking deliciousness to the next level, this Italian treat “drowns” Baskin-Robbins ice cream with Dunkin’ espresso. To learn more, check out this blog post on the story behind Affogato.

Not only was Affogato served at this speakeasy pop up event, but also signature Dunkin’ and Baskin-Robbins cocktails, including a Dunkin’ Inspired Espresso Martini. To make one at home, see the below recipe! 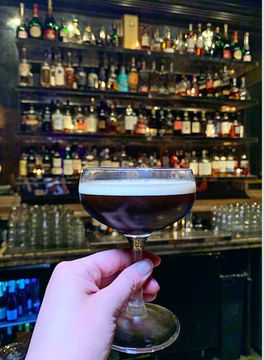 You can get a first taste of Affogato with a free sample at one of the 1,300+ Dunkin’ and Baskin-Robbins combo-locations nationwide on Monday, March 18 between 10:00 a.m. and 2:00 p.m.*. If you find yourself in New York, Chicago, New Jersey and Florida, you’re in luck – those locations boast the highest concentration of combo locations in the country.

To learn more and stay up to date on all things Dunkin’, sign up for email alerts at news.dunkindonuts.com/alerts and follow the latest on Baskin-Robbins at news.baskinrobbins.com/.