Last night, Dunkin’ Donuts hosted a Google+ Hangout featuring a live cooking challenge with the Dunkin’ culinary team and six finalists who were selected from our #DDTopChef recipe contest. Each contestant was paired up with a member of our culinary team to create, cook and defend their Dunkin’ inspired dishes in two rounds of eliminations. In the first round, Jannine F.’s recipe for DDonut DDessert Nachos was voted on Twitter as the fan favorite, and Jesse R.’s recipe for Beer and Dunkin’ Coffee Marinated Brussels Sprouts made it to the finals in the second round of eliminations. Both were fantastic recipes that incorporated Dunkin’ products in creative and delicious ways. The decision to crown the #DDTopChef was determined by Dunkin’ Donuts’ Executive Chef Stan Frankenthaler, and the winning dish went to Jannine F. for her DDonut DDessert Nachos! 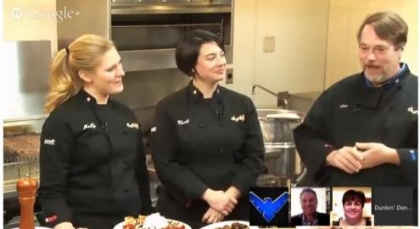 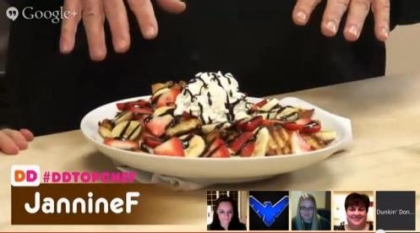 Jannine’s dish was inspired by her favorite Dunkin’ Donuts item, the Glazed Donut. She wanted to create a dish that shows that donuts aren’t just for breakfast, and that they can also be enjoyed for dessert. After receiving a Panini press for her birthday, Jannine decided to try out the Panini press to crisp up the glazed donut slices in her recipe. Since her local Dunkin’ sells bananas, she decided to purchase some along with her glazed donuts to add fresh fruit to her dish. Jannine created a wonderful and DDelicious recipe incorporating Dunkin’ products, that’s fun and easy to make right at home. 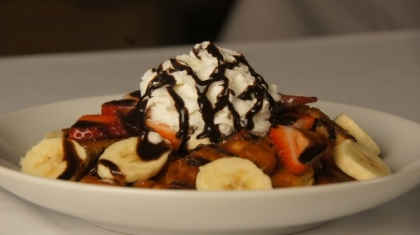 1.) Heat a griddle or Panini press* to medium-high heat.

2.) Slice the Dunkin’ Glazed Donuts in half, and then cut each slice into four pieces.

3.) Mix the sugar and cinnamon in a shallow dish.

4.) Press each donut slice, cut side down into the cinnamon and sugar mixture. Working in batches, spray griddle with nonstick cooking spray and place the donut slices on the griddle, sugared side up.

5.) Grill for 60 – 90 seconds or until golden brown on both sides. Remove with tongs or a spatula and allow to cool for 10 minutes (they will crisp upon standing).

6.) When donut “chips” are cool and crisp, arrange on a serving platter and top with the sliced banana and strawberries.

7.) Drizzle with the chocolate sauce topping and place a dollop of whipped cream in the center of the plate. Serve immediately and enjoy with your favorite Dunkin’ Donuts beverage!

*If you don’t have a Panini press, you can use a non-stick frying pan and turning once to brown both sides of the donut chips.

Check out all six finalists’ recipes and how they were cookin’ with Dunkin’ here!