This Sunday, September 29, is National Coffee Day, a day when we celebrate our love of coffee which plays an important (and sometimes necessary!) role in our daily lives, and especially in the workplace. In honor of the holiday, for the fourth year in a row, Dunkin’ Donuts and CareerBuilder®, the global leader in human capital solutions, partnered for a survey to learn more about coffee consumption in the workplace.

Here are some other fun findings from the survey about the role coffee plays during the workday:

• Coffee fuels productivity: One-third of workers (34%) claim they are less productive at work when they don't drink coffee.

• When needing a break, workers choose a cup of joe: 59 percent of workers would rather have a coffee break than a snack break at work.

• Brewing up some "me" time: Almost two-thirds of workers (65%) prefer to take their workday coffee break alone. 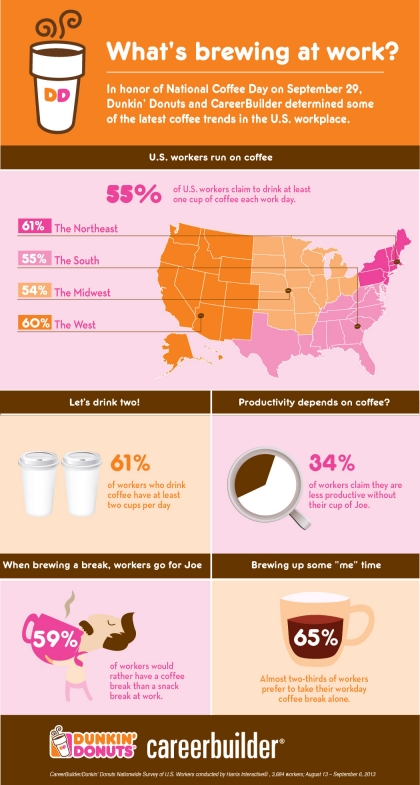 How many cups of Dunkin’ Donuts Coffee keeps you running during the workday? Tell us on Facebook and Twitter!