Back in 2008 Army veteran and now franchise owner Ray Omar traded in Drill Commands and Morning Reveille for piping hot coffee and freshly-made donuts. Little did he know then that his passion for perfectly powdered pastries and flavored lattes would lead him to opening not one, not two but three Dunkin’ Donuts restaurants throughout the state of Maryland, with nine additional restaurants planned for the future throughout the country. 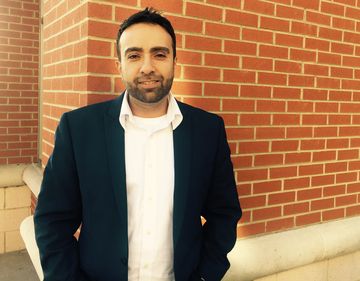 To fully understand Ray’s road to Dunkin’ success, we need to go back to the beginning. After transitioning out of the Army in 2007, Ray soon realized that the mid-Atlantic did not have a strong Dunkin’ Donuts presence like his hometown of New York City where it’s a “staple on every corner.” Ray felt that becoming a franchisee with a brand he grew to know and love was an opportunity he should explore.

Maryland however, was just the beginning for this Army vet. Ray plans to open two more locations in the Greater Washington D.C. area, and has just expanded his enterprise to also include Clarksville, Tennessee, where he will be opening four restaurants over the next several years. In fact, his first Clarksville location will be near Fort Campbell, one of the largest Army bases in the United States, which subsequently was also Ray’s home base during his tenure as a Special Operations Officer.

Ray’s military service may have come to an end in 2007 but we feel comfortable saying that his commitment to being involved with each of the communities he operates in is an admirable service in and of itself. For the past five years, his restaurants have raised $5,000 annually for the Maryland Special Olympics, and he frequently donates Boxes O’ Joe and baked goods to the local Habitat for Humanity, in addition to hiring local employees.

When asked what his plans are for the future, Ray says “opening more Dunkin’ Donuts restaurants, but in the meantime, enjoying a fresh cup, or two of coffee every morning.”

Army protocol may have trained Ray to easily stand at attention when that early morning alarm clock calls, but on behalf of the million other slow rising civilians, your DD fan-base salutes you.

For more information about Dunkin’ Donut franchising opportunities and the company’s veterans incentives you can visit http://www.dunkinfranchising.com/franchisee/en.html.