Dunkin’ Donuts Is Now the Official U.S. Coffee, Donut and Breakfast Sandwich of the NHL

The NHL now runs, and skates, on Dunkin’ Donuts! We are proud to be the official U.S. coffee, donut and breakfast sandwich of the National Hockey League, kicking off in January at the 2017 Bridgestone NHL Winter Classic® in St. Louis.

Dunkin’ Donuts will be a big part of some of your favorite Hockey events throughout the season, including the NHL® All-Star Weekend, the NHL Stadium Series™ and the NHL’s year-long Centennial celebration. We are teaming up with the NHL on everything from advertising, LED signage, jumbotron displays to on-site activations at each jewel event. We’ll even be offering special NHL team logo donuts for a limited time throughout the season at participating Dunkin’ Donuts restaurants in select markets. 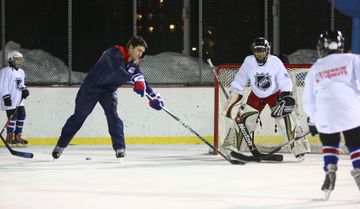 Plus, New York Rangers Captain Ryan McDonagh and Boston Bruins Center David Backes will become Dunkin’ Donuts national brand spokespeople, and will join US Women’s Team Captain and star of the Boston Pride, Meghan Duggan, in a series of advertisements.

To help kick off the exciting new partnership, we joined Ryan McDonagh  at Lasker Rink in New York on December 5, where he provided instruction to youth hockey players and members of Ice Hockey in Harlem. 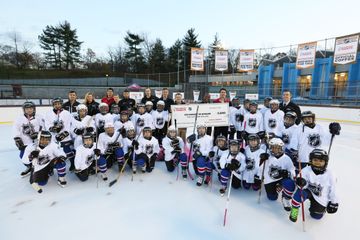 Dunkin’ Donuts is a longtime support of men’s and women’s hockey in the U.S., from donations to support youth programs like Ice Hockey in Harlem, to partnerships with several NHL franchises, the National Women’s Hockey League and the U.S. Women’s National Team. We are thrilled to now be the official U.S. coffee, donut and breakfast sandwich of the NHL as well!