Dunkin’ Donuts is running on Captain America: The First Avenger, this summer, and you can too! We’re joining forces with Marvel® Studios and are rolling out the pink and orange carpet for DD fans with delicious new Captain America inspireDD donuts and a refreshing new Coolatta® beverage. 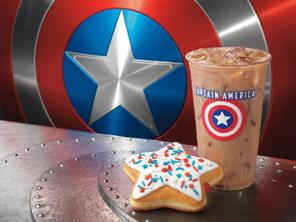 Also exciting for DD fans is our colorful new Stars & Stripes Donut, which is frosted with vibrant red icing and topped with red, white and blue sprinkles. Tip: With their red, white and blue color scheme, both of these donuts will also be a great addition to your July 4th celebration! 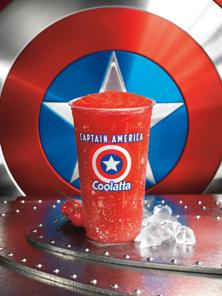 In addition to donuts, we’re excited for DD fans to try our new Cherry Coolatta® beverage, which has a refreshingly sweet, yet tart flavor.  In celebration of Captain America: The First Avenger, DD fans can be purchase our Cherry Coolatta® beverage, along with two other Coolatta® flavors, in our limited-edition, collectible First Avenger Tri-Cup. Featuring an innovative three-chamber cup with images of Captain America®, our recommended trio is red (cherry), white (vanilla bean) and blue (blue raspberry). 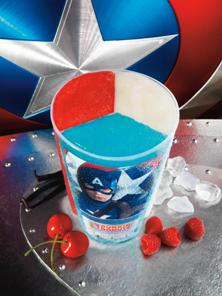 Have you tried any of our new Captain America: The First Avenger inspireDD products? Let us know what you think in the comments section below!