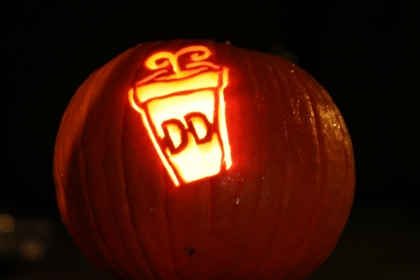 We like the style of this pumpkin carving, created by a family member of ^MG on our social media team!

Starting today and continuing through October 30, 2011 at 11:59 p.m. EST, followers of @DunkinDonuts on Twitter are invited to each submit one photo of their own jack-o-lantern creations, using the special hashtag #carveDD. Entries to the Trick or Tweet #carveDD Contest will be judged on originality/creativity (50%), overall appeal (30%) and level of difficulty (20%). Five winners will be announced on Halloween, October 31, 2011, and each will be ‘treated’ with a $50 Dunkin’ Donuts Card.

In addition to the judging criteria above, we have a few tips for you. While we want you to have fun and submit creative, original pumpkin carvings, here’s a few things to avoid:

Prior to submitting, we encourage DD fans to review our terms and conditions, which highlight the types of pumpkin carvings that we’re not able accept through the Trick or Tweet #carveDD Contest. 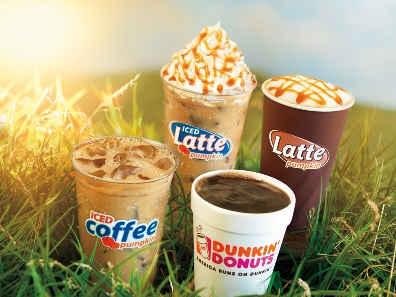 Most importantly, we want you to have fun, because that’s what the Trick or Tweet #carveDD Contest is all about. So, grab a pumpkin coffee to keep you running and pumpkin carving! We can’t wait to see what DD fans come up with!