From Round to Twisted to Bite-Sized: Dunkin’ Donuts Celebrates 15 Years of Bagels on National Bagel Day

Did you know that today is National Bagel Day? It’s true...each and every February 9 is recognized as the country’s official bagel bash and the perfect opportunity to appreciate this beloved bakery item.

According to Maria Balinska, author of “The Bagel: The Surprising History of a Modest Bread,” the boiled then baked bread is a classic rags to riches immigrant’s tale. “Bagels came to America as a snack almost exclusively enjoyed by the Jewish community, but by the 1970s ‘the roll with the hole’ was on its way to becoming an all-American favorite. Millions of bagels are consumed every day across the United States and sales are estimated to be worth over $900 million annually. Now, the bagel is available and popular in such unlikely places as Korea, Japan and Argentina.”

This year, National Bagel Day holds an extra special meaning for Dunkin’ Donuts, and not just because we sell 252 million freshly baked bagels annually, making us the #1 server of bagels in the U.S., according to the fine folks at NPD Group/CREST. Believe it or not, 2011 actually marks the 15th anniversary of the introduction of freshly-baked bagels at Dunkin’ Donuts.

Back in 1996, Dunkin’ Donuts launched bagels with national advertising pairing the iconic “Fred the Baker” with a former New York City Mayor. We offered 12 varieties, with prices ranging from 55 to 60 cents.  Some original varieties like Egg and Pumpernickel have since been replaced as we’ve added exciting new choices such as Sour Cream and Onion and our popular Multigrain Bagel (an excellent source of fiber, BTW). 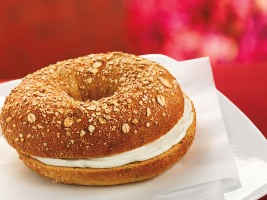 Over the years, Dunkin’ Donuts’ culinary team has earned a place in bagel history for bagel inspiration and ingenuity. In 2010, Dunkin’ Donuts unveiled the Bagel Twist, featuring our famous bagels twisted into a more portable, easy-to-eat shape, perfect to keep you running on-the-go at work or play.  They’re available in a variety of flavors…if you’re looking to satisfy your chocolate cravings this month, try the new Chocolate Chip Bagel Twist, which is drizzled in chocolate and filled with chocolate chips. 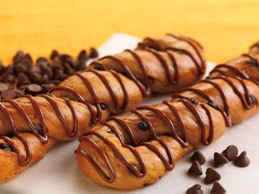 If you want to join us in the celebration of National Bagel Day, on February 9 Dunkin’ Donuts is offering brand followers of @DunkinDonuts on Twitter the opportunity to score a $100 Dunkin' Donuts Card. For a chance to win, all you need to do is offer a guess on how many poppy seeds cover a typical Dunkin’ Donuts Poppy Seed Bagel, plus the hashtag #BagelDDay. (Yes, we actually counted!)  If you would like to offer a toast to your beloved bagel, please visit the Dunkin' Donuts Facebook page to answer our 'heated' debate: Do you enjoy your bagel toasted, or untoasted?

Whether you enjoy yours round, twisted or bite-sized, with cream cheese or without, here’s a “toast” to bagels and bagel lovers everywhere. Happy National Bagel Day!