Heads or Tails? Our PEEPS® Have Spoken!

Earlier this month, Dunkin’ Donuts introduced PEEPS® Donuts, our first-ever donuts decorated with a real PEEPS® Marshmallow Chick. In honor of this new way to eat this favorite Easter treat, we decided to take a closer look at how our peeps prefer to enjoy their PEEPS®. Dunkin’ Donuts and PEEPS® this week conducted an online survey, asking fans of both brands to share which part of the PEEPS® Marshmallow Chick they typically eat first. 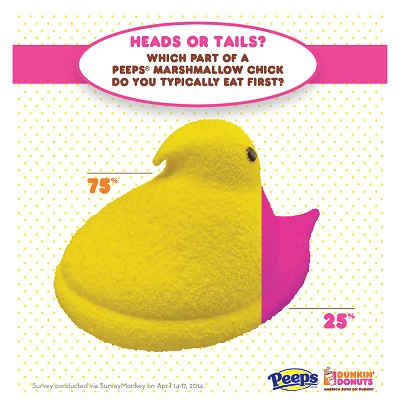 When it comes to PEEPS® Marshmallow Chicks, people definitely like to “think a head.” According to the results, nearly 75% of people prefer to start at the top by eating the head first.  Only 25% of people start their PEEPS® tale with the tail.