How COOLatta is Arnold Palmer? Announcing a National Sweepstakes! 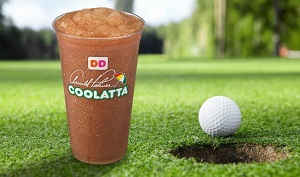 The sweepstakes starts tomorrow, July 8 and will continue to Thursday, July 10. Keep an eye out for our tweets asking one multiple choice Arnold Palmer-centered trivia question per day. Also, be sure to use our sweeps hashtag #APCoolattaSweeps and that you’re following @DunkinDonuts on Twitter to enter. Participants are eligible to win FORE! (four) daily $100 mGifts and one grand prize winner will receive a cool grand ($1,000). For additional terms and conditions, please visit: http://dun.kn/1qBIgXQ.

To get you excited for tomorrow’s sweeps, we’ve prepared three legendary Arnold Palmer trivia questions and answers to get the wheels turning. Enjoy and we’ll hear from you tomorrow! 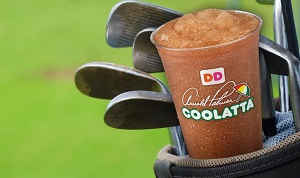 1. Besides the drink, what other cool thing is named for Arnold Palmer?

2. Arnold Palmer grew up with what TV star?

Answer: Everyone’s favorite neighbor, Mr. Rogers! Both Arnold Palmer and Fred Rogers were born and raised in the same town, Latrobe, Pennsylvania. Some sources even say that Mr. Rogers took golf lessons with Arnold Palmer, taught by Arnold Palmer’s father. How COOLatta is that?

3. True or False, Arnold Palmer is 1 of only 6 sportsmen to win the Congressional Gold Medal?

Answer: True! Arnold Palmer was awarded the Congressional Gold Medal on September 12, 2012 for his influence in both the golfing and charitable communities.  Only five other athletes have won this honor, including Jesse Owens, Roberto Clemente, Joe Louis, Jackie Robinson and Byron Nelson.