Part 2: Behind the Scenes of #mydunkin with Dunkin’ Donuts Fan Nikki K.

Dunkin’ Donuts recently launched its new #mydunkin advertising campaign featuring real Dunkin’ fans and their social media content that shows their love for Dunkin’ Donuts coffee. After sorting through tens of thousands of posts on Facebook and Twitter, Dunkin’ Donuts selected the first fans to appear in new television commercials based directly on their original social content sharing their unique Dunkin’ stories. Next, meet Nikki K., our wonderful fan enjoying a #mydunkin moment when discovering her last Dunkin’ Pumpkin K-Cup® pack in her coffee stash.

We talked to Nikki to learn more about her Dunkin’ story and go behind the scenes on the day of filming.

1.) Tell us a little about yourself and your life as a recent college graduate.

I’m originally from Lancaster, PA and I currently live in the State College area where I recently graduated from Penn State with a BS in Kinesiology. I’m currently a nanny to a family with three children and I also work with a small personal training company. I became a certified EMT in 2012 and healthcare is the direction that I would like to focus my career on. I’m interested in going back to school and becoming a Physical Therapist because I enjoy watching and helping other people improve and progress. I want to be the person that encourages them along the way.

2.) One of your passions is running and you recently completed your first half marathon in Philadelphia. What was it like crossing the finish line?

It was an amazing feeling to cross the finish line of my first half marathon! I’ve been running since I was 8 years-old and it was something my Dad and I did together. In high school and middle school, I was on the cross country and track teams and I haven’t stopped running since. I received a lot of support from my family and friends along the way and I’m so happy and proud that I accomplished this goal. I have already raised the bar and set a new goal for myself. I recently registered for my first marathon – the Rock N’ Roll marathon in Washington, D.C. in March. I started my training and I’m on a 20 week training plan. 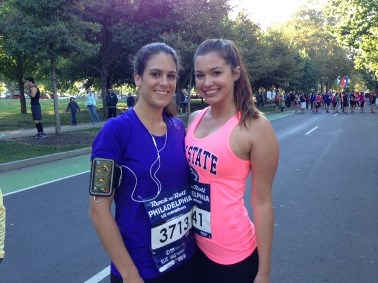 Nikki and her friend Elisa running the half marathon earlier this year.

3.) How does Dunkin’ Donuts coffee help keep you running?

I’m such an advocate of Dunkin’ Donuts coffee! I have my Dunkin’ coffee pre and post workout, and I typically drink about three cups a day. Dunkin’ coffee gives me that extra boost I need during the day, especially since I have a busy schedule with working, studying and running. In the fall and winter, my typical order is a Hot Pumpkin Coffee with cream and during the summer I love Toasted Almond Iced Coffee. Since I’m a frequent guest (yes, multiple visits a day!), the crewmembers at my local Dunkin’ know me and usually have my order ready for me when I reach the register. I’m just a huge Dunkin’ fan and all of my family and friends know it too. When they go to Dunkin’, they don’t ask me if I want anything, they ask what I would like because they know I’ll always get something and never say no to ordering a Dunkin’ Donuts Coffee!

4.) Your Dunkin’ story is about finding the last Dunkin’ Pumpkin K-Cup® pack in your stash.

I recently got home and I wanted to make a cup of coffee with my Keurig® K-Cup® single cup brewer. I keep all of my Dunkin’ K-Cup® packs in a container, so I was sorting through them when I found the Dunkin’ Pumpkin K-Cup® pack. I didn’t realize that I had any of these left and I was excited that I found it. This happened during the summer so it was a nice change to enjoy the Dunkin’ Pumpkin K-Cup® pack which has wonderful qualities of fall. I have memories of certain times during the autumn season and the qualities of the Pumpkin K-Cup like the smell and taste brought me back to them. 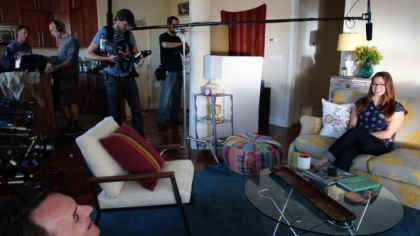 5.) What was it like hearing from Dunkin’ Donuts about the #mydunkin campaign?

When I was first contacted from the official Dunkin’ Donuts Twitter handle, @DunkinDonuts, I was so surprised that Dunkin’ was actually reaching out to me. I really didn’t expect that they were contacting me to star in one of their commercials. I was in shock at first, but when I found out that they wanted to feature my story in the advertisement I was excited and couldn’t wait to get started! 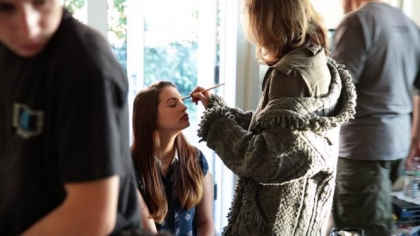 6.) Tell us about the day of filming for the #mydunkin commercial.

The day of shooting was incredible! I didn’t realize how many people it takes to make a commercial. From the prep work of the set to the make-up and stylists to the different takes, it was interesting to see the hours and the huge amount of time people put into this to make a successful advertisement. I can’t look at a commercial now without wondering how long it took to film. I met a ton of incredible people and couldn’t have asked for a better weekend. 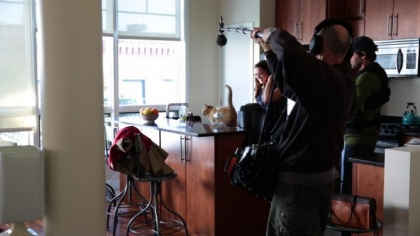