Part 3: Behind the Scenes of #mydunkin with Dunkin’ Donuts Fan Dustin P.

Dunkin’ Donuts’ #mydunkin advertising campaign features real Dunkin’ fans and their social media content that shows their love for Dunkin’ Donuts coffee. After sorting through tens of thousands of posts on Facebook and Twitter, Dunkin’ Donuts selected the first fans to appear in new television commercials based directly on their original social content sharing their unique Dunkin’ stories. Next, meet Dustin P., our latte loving fan whose #mydunkin moment was discovering he locked his keys in his truck when getting an afternoon pick-me-up at his local Dunkin’ Donuts.

We talked to Dustin to learn more about his Dunkin’ story and go behind the scenes on the day of filming.

1.) Tell us a little about yourself.

I was born and raised in Rhode Island and I’m just a family guy who works really hard. I usually have two or three jobs throughout the year, including my job with the PawSox where I work in the media department.

My background is in television production, so I’ve been both behind and in front of the camera. With my experience in production and my personal interest for paranormal investigation,  I was on six seasons of Ghost Hunters, including two seasons of Ghost Hunters International where I traveled to over 20 countries. I have a great group of people that I stay in touch with who are interested in this field and I really appreciate my fans. Engaging with them on social channels is part of my daily routine and I also enjoy giving lectures throughout the year to be able to catch up with them in person. 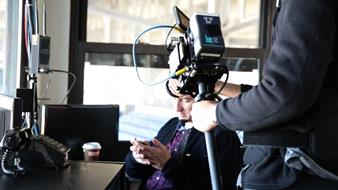 2.) Tell us what happened during your #mydunkin moment.

I was on my way to work and I usually stop at Dunkin’ Donuts to get a latte for extra boost and to help keep me running since the PawSox games can end later at night. After I got my latte, I realized I locked my keys in my truck. I was a little frustrated because I knew I was going to be late for work, but while I waited I would at least enjoy my Dunkin’ latte. I had to call my wife to ask her to bring a spare set and she wasn’t too happy about it at the time. However, now she’s definitely changed her mind about it because my story led me to this great opportunity with Dunkin’! 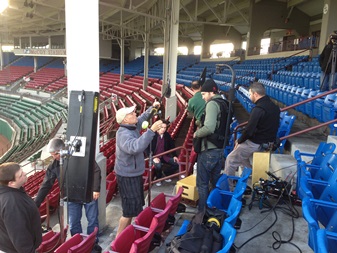 3.) What was it like hearing from Dunkin’ Donuts about this opportunity?

When I was first contacted, I must have checked the direct message (DM) from the @DunkinDonuts Twitter handle  two or three times to make sure I was reading the message correctly and that it was actually coming from Dunkin’ Donuts’ verified Twitter account. It was hard to believe that Dunkin’ Donuts was actually reaching out to me. When I was in touch with the production company, I heard more and more details about the opportunity and I was so excited to be a part of this. It was awesome to be able to do this for a company that I support and believe in. 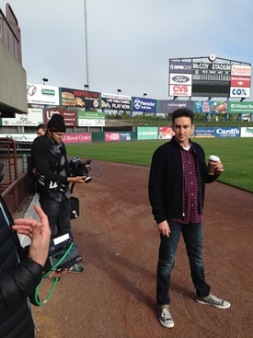 4.) Tell us about your experience on the day of filming.

We started filming very early in the morning to get the opening scenes of me at McCoy Stadium. I was so grateful that everyone at McCoy Stadium embraced the opportunity with me and was accommodating on the day of filming. I felt like the Mayor of McCoy that day! It’s always interesting being on the other side of the camera and the crew was great and very helpful during the shoot. I will say that it was difficult filming at Dunkin’ Donuts because every donut and bakery item looked delicious and smelled so good! I was getting very hungry, but we were trying to get the shot so I had to wait. I don’t think I’ve ever been in a Dunkin’ so long without eating or drinking anything! 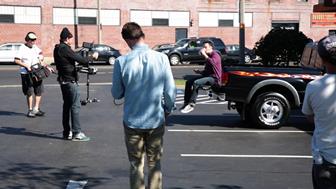 5.) What were some of your favorite moments from filming?

I loved how we used my actual pickup truck in the ad! It’s a 1999 Mazda truck but it’s still going strong even at 200,000 miles. It’s a unique truck and it really meant a lot to me that we were able to use it in the commercial.