Quest for the Cup: The Boston Bruins Run on Dunkin’

Boston sports fans were in for a surprise on Tuesday, June 7 when Dunkin’ Donuts led a city-wide “golden ticket” hunt to give away 10 pairs of the most sought after tickets in years—to see the Bruins live in action during their quest for the cup.

Dunkin’ Donuts street teams kicked off the morning’s festivities by handing out 5,000 Dunkin’ Donuts Cards in North and South Station, each loaded with $2.50. As a gift that keeps on giving, 100 of these cards were marked with a sticker, detailing the next steps to qualify for a chance to get Caught Cold and win Bruins tickets. 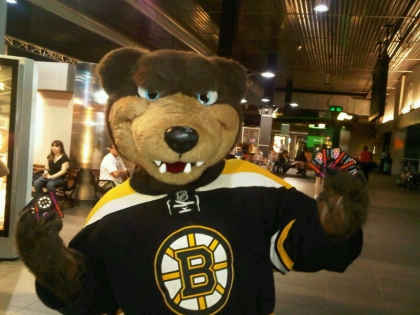 The specially marked DD Cards directed fans to a secret Dunkin’ Donuts location downtown where they entered their names into a lottery for the 10 sets of tickets. To top it all off, Bruins legend Ray Bourque made a surprise appearance to personally draw the names. These 10 lucky fans who were “Caught Cold” received tickets to the game from #77 himself!

The giveaway – worth over $15,000 –  was part Dunkin’ Donuts’ Caught Cold campaign, which rewards and surprises its loyal DD Iced Coffee fans with free tickets to Boston sporting events and concerts throughout the year. Participation is easy—if you’re “Caught Cold” by our street team you could win tickets to an upcoming game or concert! For official rules and information on how to participate without purchase, please click here.

Once the Bruins clenched the Cup, Dunkin’ Donuts wanted to celebrate by making a loyal Bruins season ticketholder the luckiest person in Boston – we sent him to ride in the Bruins Championship Parade on the Dunkin’ Donuts Duck Boat. 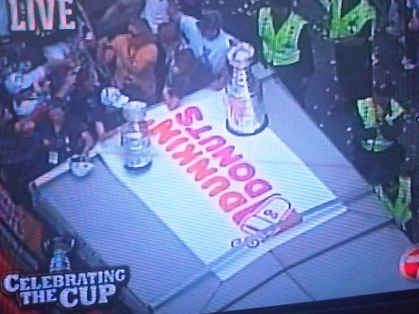 Jamaica Plain resident and social worker, Kevin DeForge, and his wife Cheryl, rode in the parade next to Bruins’ stars Nathan Horton and Marc Savard while Dunkin’ Donuts street team members distributed 20,000 $2.50 DD Cards to parade goers.  Not only did Kevin and Cheryl get the best seats at the parade, they also became instant celebrities as Boston media lined up to interview them about their experience.

“We are honored that Dunkin’ Donuts wanted to share this experience with us,” said DeForge. “We believe in paying it forward and helping others, and we will find a way to pay this forward somehow.”

So how does this lucky Bruins and Dunkin’ Donuts fan take his coffee? Medium light with three sugars.

Congratulations to the Boston Bruins from your friends at Dunkin’ Donuts!