Sharing our Support for the National Women’s Hockey League

Last year, we were honored to become the first corporate sponsor of the National Women’s Hockey League.

The NWHL launched last season as the first paid professional women’s hockey league in the US.  We were delighted to become the official coffee and quick service restaurant of the league and support its four teams: the Buffalo Beauts, Boston Pride, Connecticut Whale and New York Riveters. 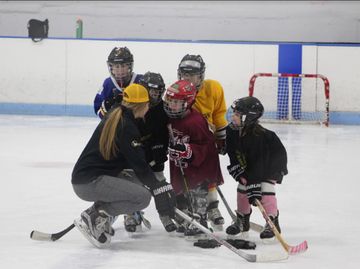 We’ve recently learned that our friends at the NWHL were facing financial difficulties and made the difficult decision to cut player salaries in order to keep the league going.  As a strong supporter of the NWHL and women’s hockey, we’ve pledged an additional $50,000 to go directly to players’ salaries.

In an effort to inspire the next generation of women’s hockey players, we have also been hosting youth hockey clinics, where young hockey players are able practice their skills with NWHL players, including Boston Pride star and former Olympian, Meghan Duggan.

"We believe in the league and we believe in the opportunity to give these women a chance to succeed," said Tom Manchester, our Vice President of Field Marketing. "As a sponsor, it's not about dasher boards and signage and traditional marketing elements. It’s about growing the presence of women’s hockey and showcasing the amazing talent of these players for years to come.”