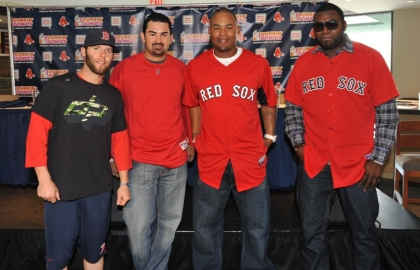 To preview the commercials and give fans the chance to meet the players, Dunkin’ Donuts sponsored a lunch at Fenway Park on May 2. One hundred lucky Dunkin’ Donuts customers won a pair of tickets to a special “What Are You Drinkin’ Fenway?” lunch through radio and Twitter promotions. The weather was perfect, the Sox had won their game the night before and the crowd was full of energy!

John Dennis from WEEI SportsRadio served as the emcee of the event.  The audience was treated to funny stories, including one about getting ice cream: “I went for ice cream with my son last night, and the guy behind the counter starts talking to me about the lineup. I said, ‘Sir, if you don’t give me the ice cream I’m going to kick your (butt),” said Pedroia. Guests also found out that David Ortiz loves the Boston police in case he is running late for games!

We also learned the guys all have particular ways they like their Dunkin’ Donuts, whether it’s iced coffee with a turbo shot for Pedroia or an iced mocha coffee for Gonzalez – the customization and energy options are endless! Check out some more highlights from the event:

Don’t forget that we’re also giving Metro Boston fans that are “Caught Cold” with a Dunkin’ Donuts Iced Coffee a chance to win free Red Sox tickets every Wednesday throughout the summer. Visit www.dunkindonuts.com/caughtcold for details.

No matter what team you root for, we know you’re a fan of Dunkin’ Donuts. So tell us “What Are You Drinkin’?