The Joy in Childhood Foundation® To Bring 10 Starlight Sites Nationwide

For hospital patients, spending an extended period of time in a hospital means being away from home and places like a kitchen, living room, or garden that bring comfort. For some patients post-treatment, these places do not function the same as they did before. Being wheelchair bound means kitchen counters and tables are out of reach and those lounge spaces aren’t as comfortable as they used to be. This makes bringing families and friends together more challenging than before.

In an effort to ease stress and support the overall health and well-being of pediatric patients, Starlight Children’s Foundation and The Joy in Childhood Foundation® have worked together to create Starlight Sites. You might be wondering, what exactly is a Starlight Site? Starlight Sites bring joy to kids battling illness by transforming hospital spaces into bright, fun, kid-friendly spaces like playrooms, kitchens, teen lounges and gardens that help bring families and friends together while being suited to patient’s needs. 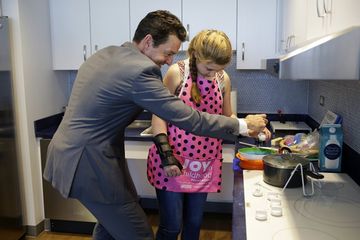 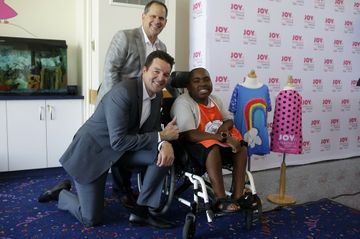 Dunkin’ Donuts and Baskin-Robbins franchisees, members of the local Dunkin’ Donuts team, and Alderman Raymond Lopez and Jeanine Robinson, Chief of Staff for State Representative Christian Mitchell, were all in attendance. Mayor Rahm Emanuel also issued a proclamation to declare June 18 a “Day of Joy” in Chicago. However, the stars of the show were three of Starlight and La Rabida’s all-star patients – Maddy, Alberto and Keith – who were able to show off the amazing aprons they designed in honor of the new kitchen and participated in a ribbon cutting ceremony. Maddy also did a cooking demonstration in the new kitchen for the attendees who later had the opportunity to sample her dessert.

This announcement follows the three-year commitment to Starlight Children’s Foundation announced in 2017 in support of programs that bring joy and comfort to hospitalized kids, including the Starlight Sites program. To learn more about the Joy in Childhood Foundation, please visit www.dunkinbrands.com/foundation or follow us on Facebook www.facebook.com/JoyInChildhoodFoundation/