The Story Behind Pumpkin at Dunkin’

Every year during the peak of summer, our guests begin telling us how pumped they are for pumpkin. In fact, pumpkin is by far the most talked about flavor among our fans on social media! In honor of the official start of fall next week, we’re sharing the story behind the favorite flavor of the season.

More than 10 years ago we introduced what are now staples of Dunkin’s fall menu: our Pumpkin Donut and MUNCHKINS® donut hole treats. The cake donuts are made with real pumpkin puree and topped with glaze to bring out the natural spices. According to Rick Golden, our very own Manager of Donut Excellence here at Dunkin’, our pumpkin-loving fans look forward to these sweet treats all year; not only because they’re delicious, but because they evoke feelings of comfort and nostalgia in every bite.

While these tried-and-true treats have graced our fall menu for more than a decade, our culinary team is always exploring fun, new twists on the classic Pumpkin Donut. For example, in 2013, we launched a Pumpkin Pie Donut, featuring a pumpkin pie-flavored, buttercreme-filled donut. And, in 2015, we introduced a Pumpkin Cheesecake Square, filled with smooth and creamy pumpkin cheesecake filling. 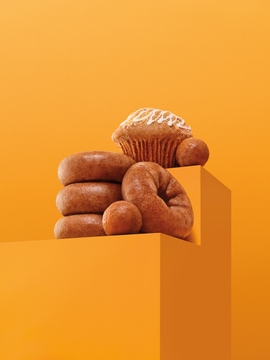 Our fans’ passion for pumpkin extends beyond the bakery case to our beloved pumpkin flavor swirl, which also hit Dunkin’ menus more than a decade ago and has been a guest-favorite ever since. This year, we spiced things up even further with the exciting new Cinnamon Sugar Pumpkin Signature Latte.

The delicious new drink features pumpkin and cinnamon flavors, topped with whipped cream, a caramel drizzle and cinnamon sugar topping. Kelly German, Senior Research and Development Technologist here at Dunkin’, shared that the inspiration behind the new beverage came from the heartwarming desserts that symbolize fall, like pumpkin pie! The cinnamon and pumpkin flavors perfectly complement each other in our signature espresso, and topped with cinnamon sugar and caramel, take the classic flavor to the next level. 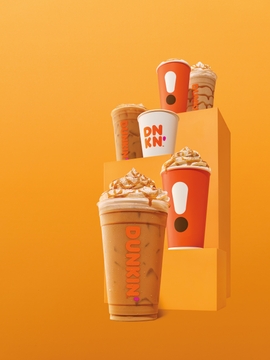 Our pumpkin offerings, one of the largest varieties of any national restaurant chain, also extend to our fast-growing lines of ready-to-drink beverages and K-Cup® pods! Dunkin’ Pumpkin K-Cup pods, available seasonally at participating Dunkin’ restaurants, grocery and other retailers nationwide as well as online, have been a great way to enjoy the taste of our Pumpkin Flavored Coffee at home since they launched in 2012.

And, debuting just last year, our bottled Pumpkin Spice Iced Coffee was modeled after our in-store pumpkin flavor swirl. According to Courtney Anderson, Research and Development Manager at Dunkin’, the on-the-go pumpkin pick-me-up features a unique, nutmeg-forward recipe that fans can’t get enough of. This seasonal sip is now available for a limited time at grocery, drug, convenience stores and mass merchandisers nationwide.

Dunkin’ Debuts its First Ever Halloween Costume at New York Fashion Week, Available Exclusively to their Instagram Fans in October