Today is National Space Day and the stars are perfectly aligned because our Cosmic COOLATTA® frozen beverages and Shooting Star Donut are back at Dunkin’. In fact, if you peer into the night sky, you might notice that four stars in the Ursa Major constellation resemble the exact shape of a Cosmic COOLATTA. Coincidence? WE THINK NOT!

As you can imagine, we were over the moon to discover the galaxy’s only everlasting billboard made of real stars. So, we’ve taken it upon ourselves to hereby declare this earth-shattering discovery the Cosmic COOLATTA Constellation, formed by Graporius Minorus, Strawberrium Majora, Blusces Raspberion and simply, Pineapple (a.k.a. Psi Ursae Majoris, Upsilon Ursae Majoris, Theta Ursae Majoris and Phecda).

To further celebrate National Space Day, the Cosmic COOLATTA Constellation and our out-of-this-world seasonal menu, we teamed up with aspiring astrounaut Abigail Harrison, popularly known as Astronaut Abby. Abby has earned universal acclaim as an aspiring first astronaut to Mars, and founder of The Mars Generation, a non-profit that energizes youth about space and STEAM, and educates about the importance of deep space exploration to humankind. We asked her a few cosmic questions; check out her answers below! 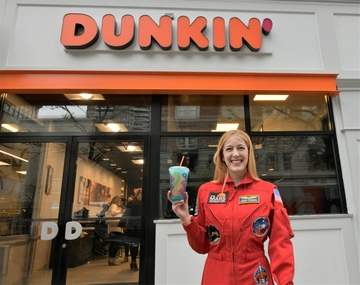 Q: Dunkin’ created a Cosmic COOLATTA Constellation by connecting four stars. Do you see interesting shapes or designs when you stargaze?

A: Absolutely! I love stargazing and think one of the best things about it is that it leaves so much room for creativity. Everyone sees something different when they look at the night sky. For example, clouds are often considered to be a negative for stargazing because they obscure visibility, which is true, but I personally like clouds with my stars because they allow for greater imagination.

Q: What is the Mars Generation Project, and how and why did it begin?

A: I founded The Mars Generation in 2015 when I was just 18 years old. The Mars Generation is a volunteer-driven 501(c)(3) nonprofit that aims to excite and inform the public about the importance of human space exploration and STEAM (science, technology, engineering, arts, math) education to the future of humankind. We work to serve both students and adults from around the world through programs like the Space Camp Scholarship Program, which provides full funding and transportation to Space Camp for students with great STEAM aptitude and financial need.

Q: Obviously, you were born long after the Moon Landing, but what does the 50th anniversary milestone mean to you?

A: Going to the moon – making the impossible possible – has inspired people around the world to reach further, dream bigger and think beyond their limits. The moon landings energized an entire generation and sparked a national interest in investing in science and innovation. This has led to technological advances that could not have even been imagined back in the 1960s and 1970s.

Q: When you made being an astronaut your mission, what is the best piece of advice you received?

A: The best piece of advice was given to me when I was 13 years old after meeting an astronaut by chance in an airport. Astronaut Luca Parmitano of the European Space Agency encouraged me to pursue my passions, not tailor my career to what I thought NASA would want in an astronaut candidate. You never know exactly what NASA will be looking for during each astronaut selection, but one thing is certain: NASA looks for people who are passionate about their work. This advice has guided all my educational decisions and career path as an astrobiologist.

Q: What advice do you have for any kids interested in being an astronaut too?

A: Much like landing on the moon, I believe that attempting things that seem difficult, or even impossible, can lead to unimaginable results. The best advice I can give to any kid who has a huge dream – such as becoming an astronaut – is to stay committed to their education, follow their passions and always stay curious.

Interested in stargazing with Dunkin’ and seeing our Cosmic COOLATTA Constellation up close? Follow us on Instagram to find where we’ll be hosting a galactic viewing event.